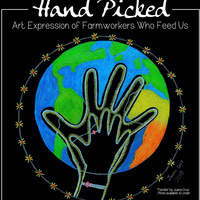 Hand Picked: Art Expressions of Farm Workers Who Feed Us

From June through October 2018, a series of three art workshops, funded by the National Endowment for the Arts, was conducted for migrant farmworkers in eight counties of Western New York. These workshops culminated in an exhibition titled Hand Picked: Art Expression of Farmworkers Who Feed Us.

So often farmworkers are an invisible population in this country, yet they are invaluable to our communities and our economy. These workshops produced a gestalt of various aspects of the individual artists themselves, to pull away the veil, so that they can truly be seen as deeply feeling human beings who are gifted and talented, and dedicated to their families, communities, and their work. This vision for a traveling exhibition was designed to raise the awareness of all viewers toward a clear understanding of the inner and outer lives of migrant farmworkers in eight counties of Western New York. This exhibition also features six poems by Mexican and Puerto Rican participants in our literature program that was funded by the New York State Council on the Arts.

Hand Picked is funded in part by the National Endowment for the Arts and the New York State Council on the Arts.