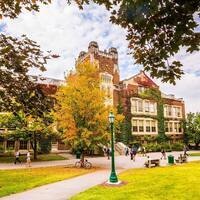 Please join us for a talk by Dr. Ben Railton, a professor of English from
Fitchburg State University in Massachusetts, who is the author of *We the People: The 500-Year Battle over Who is American *(Rowan, 2019). This event is co-sponsored by American Studies and the History Department, and will be held on Thursday, November 14 at 7:00 pm in South 338. Books will be available for purchase.

The Constitution begins with those deceptively simple words, but how do Americans define that "We"? In this talk based on his new book *We the People*, Ben Railton will argue that throughout our history two competing yet interconnected concepts have battled to define our national identity and community: exclusionary and inclusive visions of who gets to be an American. From the Revolutionary period's debates on African American slavery to 20th-century controversies around Filipino Americans and Japanese internment and 21st-century fears of Muslim Americans (among many other eras and histories), time and again this defining battle has shaped our society and culture. Carefully exploring and critically examining those histories, and the key stories and figures they feature, is vital to understanding America—and to making sense of the Trump era, when the battle over who is an American can be found in every significant debate and moment.