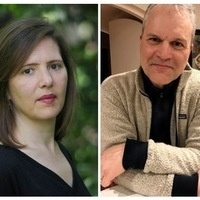 Democratic government requires an informed citizenry—one which is capable of making responsible political choices and serving as the active guardian of its own liberty.  Today, the ubiquity of the internet and social media (which were once hailed for their potential to inform and unite), together with rising populism and the willingness of an American president to sanction conspiracy theories, has contributed to a debilitating polarization and raised new and troubling questions about the future of constitutionalism and civic education.  Please join us for a discussion with J. Russell Muirhead and Laura K. Field as we seek to understand the implications of these developments for the future of democracy in the United States.  A Zoom link will be shared soon.

Russell Muirhead is Robert Clements Professor of Democracy and Politics and chair of the Department of Government at Dartmouth College, where he is also co-director of the Political Economy Project and Interim Director of the Rockefeller Center for Public Policy.  He is the author (with Nancy Rosenblum) of A Lot of People Are Saying: The New Conspiracism and the Assault on Democracy (Princeton University Press, 2019).

Laura K. Field, a writer and political theorist, is Senior Fellow at the Niskanen Center and Scholar in Residence at American University.  She writes about current political affairs from a vantage point informed by the history of political thought and has taught at Georgetown, Rhodes College, and American University. Her academic writing spans antiquity and modernity, and has appeared in The Journal of Politics, The Review of Politics, and Polity. She has also published political commentary for the Niskanen Center and in The Bulwark Online.  Field’s current work explores the role of ethics and evaluative judgment in the modern world.

The Forum on Constitutionalism and Democracy at SUNY Geneseo was established in 2019 by Professors Carly Herold and Aaron Herold to establish programming and foster campus conversations about civic education and liberal democracy.  The Forum is supported by a grant from the Jack Miller Center for Teaching America’s Founding Principles and History.