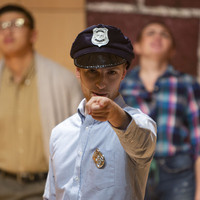 The Department of Music’s Musical Theatre Program proudly presents Urinetown, a comic parable on sustainability by Mark Hollman and Greg Kotis. In this post-environmental apocalypse world, water is in such short supply that private plumbing has disappeared and all but a handful of the rich must pay to use public amenities. A single company has arisen, manipulating government and the law into giving it a monopoly on washrooms, and passing laws requiring the public to use them. Can an idealistic hero or political organizing bring down the system for the benefit of the people? Come see Urinetown, November 6-10, 2019, in Doty recital hall, to find out!

Urinetown is the musical theatre program’s “page to stage” production, in which all majors participate in a process-focused production, with only the design and technical elements required to tell the story. This production of Urinetown features Tristan Strasser as Officer Lockstock, our narrator; Rocky Nardone as Bobby Strong, our hero; Carl Treiber as Caldwell B. Cladwell, our monopolistic villain; Sydney Lyons as Hope Caldwell, his idealistic daughter; Kayla McGallian as Penelope Pennywise, a businesswoman who runs an amenity in the bad part of town, Annie Levine as Little Sally, a young resident of the bad part of town; Will Snyder as Senator Fipp; Patrick Jones as Mr. McQueen; Mick Elliott as Office Barrel; Ben Bernstein as Old Man Strong and Hot Blades Harry; Kelsey Roberts as Josephine Strong; Sandra Kralik as Little Becky Two-Shoes and Mrs. Millennium; Kat Berton as Soupy Sue and Cladwell’s secretary; Brett Hammes as Billy Boy Bill and UGC Executive; and Jacob Anspach as Robby the Stockfish and Dr. Billeaux.